Not even a high-performance KEE roof membrane was a match for Mother Nature. When heavy storms and hail damaged the roof at a major furniture manufacturer’s Missouri facility, its facility professionals spent subsequent years repairing the damage. Continuous ongoing roof maintenance caused disruption to facility operations, though, and there was a concern about rainwater being absorbed into the insulation around drains. With an R-value of less than 10, the existing roof system’s performance just wasn’t measuring up to expectations.


A reroofing project was necessary. The project would address the roof areas of most concern at the manufacturing plant. The Facility Engineering Manager provided a base requirement, which D. C. Taylor Co. enhanced. The work would be completed in two phases, the first of which took place in spring 2016. For two months, crews worked to replace 24,300 square feet. D. C. Taylor Co. was back again for two months in spring 2018 to complete another 37,600 square feet.

D. C. Taylor Co. removed the two roof systems and existing decking and disposed of it. They replaced it with 20-guage galvanized decking, fastening to the existing structural steel. At the manufacturer’s request, the old metal deck was sorted into a separate dumpster and the customers’ scrap metal service recycled it.

For Phase II of the project, crews installed Type B galvanized deck (instead of Type A), which is already painted to spare the furniture manufacturer the disruption caused by moving workers to paint the underside of the deck.

Thermal efficiency was improved to an R-value of 30. D. C. Taylor Co. removed many skylights and eliminated every penetration no longer needed. Crews installed two layers of 3-inch isocyanurate insulation, staggering side and end board joints on the second layer for a minimum of 6 inches from the bottom layer to avoid thermal bridging.

New 60-mil TPO membrane was mechanically fastened to the steel deck and flashing details at penetrations and the perimeter were installed per manufacturer’s specifications. With the addition of new metal coping cap and tie-in to the remaining existing roof (to be replaced during future phase), the project was complete. 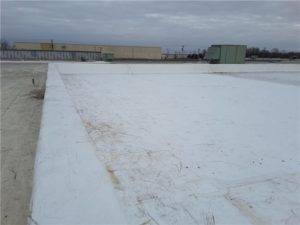 
Deck replacement is always a safety challenge and requires roofing crew members to be 100% tied-off to fall protection at all times to prevent injury.

Another requirement was minimizing the amount of dust and debris from entering the plant. A subcontractor hung interior protection that included safety netting and plastic sheeting horizontally under existing lighting. When you take the roof off, there’s a lot of negative pressure, which can cause dust to blow around on all the finished goods and people in the plant.

The old decking was crumbling. D. C. Taylor Co.’s project supervisor devised a plan to minimize dust and debris; crews cleaned the roof first and removed and replaced smaller pieces of decking. This helped keep larger pieces of debris out of the interior protection safety net.

No one was allowed under the areas where deck replacement was taking place. This posed a challenge as the facility remained operational during the project. Cells, designated areas where the manufacturer’s employees work on sofa assembly, below the roof had to be moved. Daily communication between the project supervisor and facility professionals was necessary.

An initial plan was set by drawing the facility, planning where crews would be working, and listing which cells had to be moved on certain dates. Weather required flexibility with this plan; D. C. Taylor Co.’s project supervisor talked to facility management regularly to tell them where the crew would be working each day. Carts containing tools and parts had to be tagged (when interior protection was installed) so they could be put back in the right cells.

The constant communication, vigilant safety, and detailed project planning meant that Phase II went even smoother than Phase I. D. C. Taylor Co. looks forward to returning to Missouri, to complete the remainder of the roof areas in need of replacement, when the furniture manufacturer is ready for Phase III.